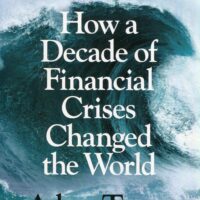 Crashed: How a Decade of Financial Crises Changed the World

Winner of the 2019 Lionel Gelber Prize ‘Majestic, informative and often delightful … insights on every page’ Yanis Varoufakis, Observer The definitive history of the Great Financial Crisis, from the acclaimed author of The Deluge and The Wages of Destruction. In September 2008 the Great Financial Crisis, triggered by the collapse of Lehman brothers, shook the world. A decade later its spectre still haunts us. As the appalling scope and scale of the crash was revealed, the financial institutions that had symbolised the West’s triumph since the end of the Cold War, seemed – through greed, malice and incompetence – to be about to bring the entire system to its knees. Crashed is a brilliantly original and assured analysis of what happened and how we were rescued from something even worse.