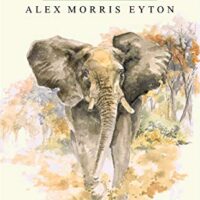 Athena , the aged matriarch, steered her herd along the lip of Zimbabwe’s Matuzviadonha Range. At Last, she found the entrance she sought and ever wary, sniffed fr dange. An African hear haze hit the Zambezi wilderness far below. Shaped by a million feet, the narrow trail was one used by Atena’s mother and her mother’s mother, over the passing generations. Behind her in an extended line, sixteen elephants placed each foot in turn, descending the precipitous slope.